Be amazed at the clever techniques plants use to attract their pollinators, be it birds, beetles or bats.

Scent, colour, shape and entrapment are all part of the pollination game for certain plant species.

Pollination occurs when pollen grains are transferred from the male anther within the stamen of a flower to the female stigma, leading to fertilisation and seed production.

Check out these fascinating plants that use seductive techniques to attract their pollinators for sexual reproduction, from beetles and flies to birds and bats.

The largest of all waterlilies, Victoria amazonica, is a master of seduction.

It uses its aroma, heat and hostage-taking ability to achieve pollination.

The beetles that pollinate this plant are attracted to its fragrant flowers.

But the giant waterlily has another trick. The flowers are also thermogenic, meaning they produce heat, and entice the beetles with their warmth.

Opening at sunset, the flowers are white on the first day of flowering. The nocturnal beetles land on the flower and fertilise the plant with pollen stuck to their feet and bodies.

The next morning the flower closes around the beetles. During this time, the pollinated flower changes colour from white to pink, while pollen is released from the stamen.

The following evening, the flower re-opens and the beetles make their escape carrying the newly released pollen.

Drawn to the strong perfume of another white flower, the beetles fly to this, pollinating it.

Unfortunately, we don’t have these beetles here at Kew so we hand-pollinate our giant waterlilies, which live in our Princess of Wales Conservatory.

Insects are not the only pollinators in the game. The dragon fruit cactus (Hylocereus polyrhizus) lures bats for pollination.

Native to the tropical forests of Central America, this species opens its buds at dusk.

The big pale flowers attract hungry bats with their sweet scent. To make it even easier for the animals, the flower’s wide surface area reflects the sound signals of the echo-locating mammals.

Reaching the plant, the bat forces its head into the flower, trying to reach the nectar with its long tongue.

As this happens, pollen is attached to the bat’s furry body. When the bat has finished feeding, it flies off to the next flower transporting the pollen.

Having large pollinators, such as birds or bats, comes with some big benefits. These animals can carry greater pollen loads and travel further, helping improve the chances of pollination.

Dracula are a group of orchids with a wily way of fooling fruit flies for pollination.

Their flowers emit a fragrance which mimics the smell of gilled fungi. On top of that, the lip, a specialised organ characteristic of the orchid flower, resembles the shape of the fungi.

So the fly species that normally lay their eggs in these fungi are attracted to the Dracula flowers and then inadvertently pollinate them.

The titan arum is also known as the corpse flower and for good reason.

Its huge inflorescence (the flowering head) emits a disgusting stench of rotting flesh.

This smelly adaptation attracts pollinating insects that are looking to feed and lay eggs on decaying flesh. Adding to the allure, the plant’s interior is dark purple like a decomposing corpse.

When its flowers are ready for pollination, the pollen-carrying insect crawls inside to the bottom of the inflorescence and deposits pollen on the receptive female flowers.

Outside of its native Sumatra, Kew was the first place to experience the flowering of the titan arum in 1889. The night-flowering plant can take 20 years to flower from seed.

See our magnificent titan arum in the Princess of Wales Conservatory.

Sitting on top of the horizontal green and pink bract (the leaf-like structure), the inflorescence of the Strelitzia reginae resembles the crest on an exotic bird's head.

That’s where the plant’s common name ‘bird of paradise’ comes from.

In its native South Africa, the species' appearance and bright colours attract bird pollinators, such as the Cape weaver (Ploceus capensis).

Searching for nectar, the bird lands on the perfect perch of blue petals which exposes the hidden pollen in the anther. As the bird dips its beak into the corolla tube to eat the nectar, pollen is transferred onto the bird.

While sipping, the bird keeps its feet still, which reduces the chance of the plant self-pollinating.

When the feathery creature flies to another plant, this pollen is transferred to the stigma of the new flower, achieving pollination.

You can find our bird of paradise growing in the Temperate House. 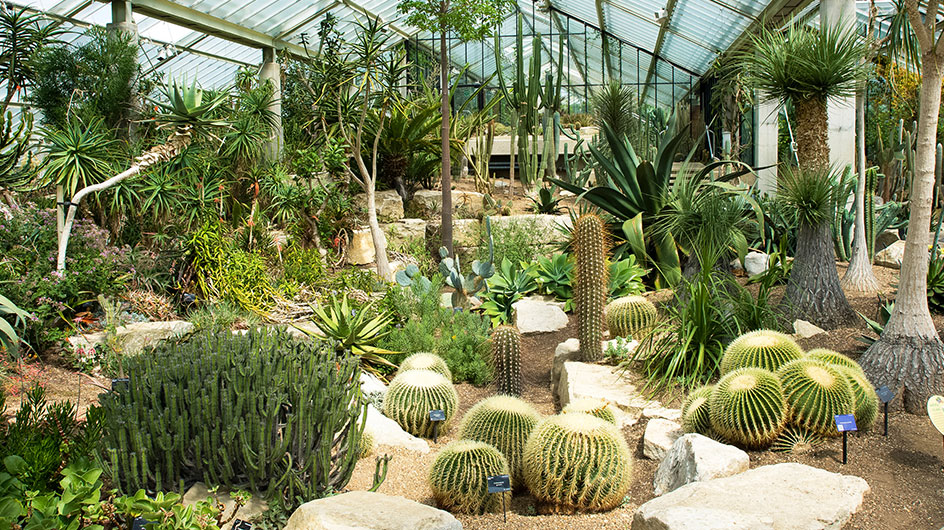 Travel from the deserts to the tropics with a trip through this glassy wonderland.