Things you should know about Marianne North

Meet Marianne North, an intrepid artist of the Victorian era who explored the world.

From mighty redwoods in California to pitcher plants in Borneo, she painted plants great and small across the globe.

She turned her back on the life expected of her as a Victorian woman. Instead, she made it her mission to paint as many plants in faraway places as she could.

She travelled the world solo

When Marianne North was 26 years old, she visited Kew Gardens with her father and was inspired by what she saw.

On one visit, she was particularly struck by a bunch of flowering Amherstia nobilis, the first to flower in England given to her by Kew’s Director Sir William Hooker.

This ignited her passion to see the tropics for herself, and she became fascinated with plants and the natural world.

She had a close relationship with her father, and they went on trips around Europe together.

His death in 1869 left her devastated. She was 40 years old and unmarried, but this didn't stop her embarking on a series of solo trips to some of the wildest places on Earth.

It was a common Victorian belief that women shouldn't travel alone without a husband or male chaperone. The lives of most Victorian women in the middle and upper classes revolved around the home, where they would look after their husbands and children.

But between 1871 and 1885 Marianne travelled extensively, almost always on her own. From Brazil, to Jamaica, to Japan and India, she visited 15 countries in 14 years and painted the people, places and plants that she saw.

She challenged conventions in botanical art

Botanical art in Victorian times were painted in watercolour on light backgrounds. This was to depict the colour of plants in a life-like way.

Marianne bucked this trend, and used oil paints which gave her paintings more vibrancy and impact.

She also painted plants within their natural settings, sometimes including animals, temples and people in her paintings.

Although different to traditional botanical illustration, it was a style that gave the viewer a sense of the habitats in which different plants grow.

It was bold and bright, a style that hadn’t been seen before.

She discovered plants unknown to science

Marianne's paintings and writing give detailed information on the location, habitat and uses of many of the plants she painted.

On her travels, she collected and discovered plants that were new to botanical science at the time.

When botanists saw it, the painting caused great excitement. The species was named Nepenthes northiana in her honour.

She painted some of the wildest places on Earth

Her work is a record of the dramatic landscapes she visited and the plants that grow there.

Years before the invention of colour photography, her paintings were a vibrant snapshot of faraway places that many people in Europe had never seen before.

She commissioned the Marianne North Gallery at Kew in 1879, where over 800 of her paintings are still displayed today.

She wanted gallery visitors to experience the places she'd visited through her work, at a time when travelling was a privilege for the wealthy.

Through her art, she sought to inspire and educate people about the natural world.

She had a distinctive painting style

It's believed she used a limited palette and favoured certain colours, including cobalt blue, lead white and the red dye madder.

She didn't use black paint very frequently, which explains why her paintings are so vibrant.

She preferred to use blue, green or orange to tone down strong colours. Having a restricted palette reduced the amount of materials she needed to carry with her as she travelled long distances.

She sketched out her composition first on the paper before painting on the colours later, sometimes reworking compositions and painting new ones over the top of her drawings.

The Marianne North Gallery houses over 800 of her paintings

In 1879 Marianne wrote to Sir Joseph Hooker, Kew's renowned director. She offered him her collection of botanical paintings as a well as a gallery to house them in.

Marianne chose the site for her gallery, and appointed her friend to design and supervise the building work.

Marianne had a clear vision of how she wanted the gallery to look and feel. She fitted and framed her paintings, and was involved in the gallery decoration.

She hoped tea and coffee could be served at the gallery, but this was declared impossible by Hooker due to the number of visitors to the Gardens.

As a reference to this refusal, she decorated the door panels of the gallery with paintings of tea and coffee plants.

Opened in 1882, the gallery houses 838 of Marianne's paintings to this day.

The gallery is a celebration of nature, and a snapshot into the world of a Victorian globe trotter.

Be inspired by Marianne's world with our coffee table book, which brings together Marianne North’s vibrant Kew collection. 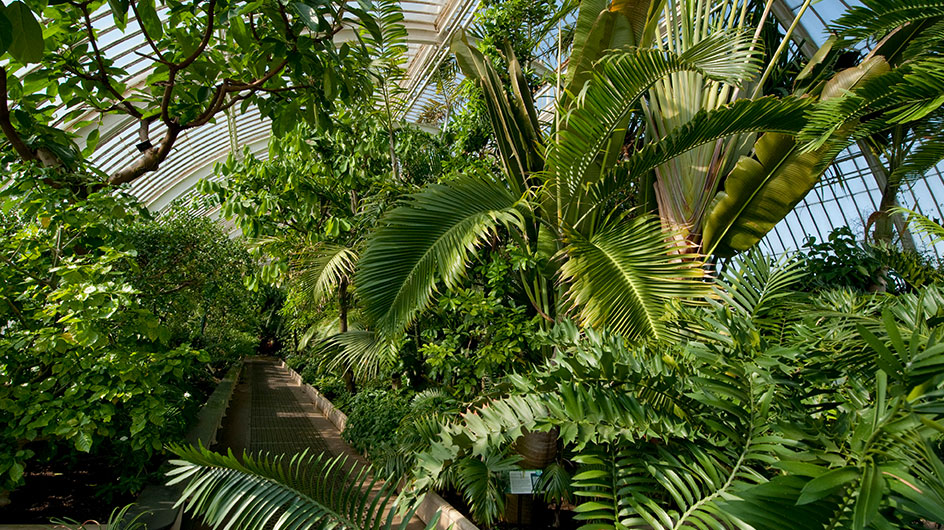 Explore Kew from your sofa

Visit Kew Gardens virtually and get a dose of nature.