From barn owls to grass snakes, our gardens are alive with a diverse range of wild creatures.

Foxes, badgers, and dormice are just some of the wild animals that call Wakehurst home.

With its many woodlands and Loder Valley Nature Reserve, our botanic garden nestled in the heart of Sussex is the perfect habitat for many different species of native wildlife.

Tiny and fluffy with big black eyes, the hazel or common dormouse (Muscardinus avellanarius) is undeniably one of the cutest creatures living in our gardens.

Within our Loder Valley Nature Reserve, a mix of wetlands, meadows and woodlands, the undergrowth of brambles and hazels provides the ideal cover and food for this endangered little golden-brown mouse.

Feasting on nuts, seeds and berries in autumn, the mini mammals eat tree blossom in spring, along with insects in summer.

These sleepy creatures spend most of their time up trees but hibernate throughout winter in nests on the ground, curling up in a ball for warmth.

As part of a conservation effort to save this rare species, we have been part of the National Dormouse Monitoring Programme (NDMP) since it began in the early 1990s.

We added 270 boxes across our woodlands for the dormice to use for day nests and breeding.

Our wardens check these boxes once a month from April to November each year. The sex, weight, breeding condition and number of young of each dormouse is recorded.

Sitting at the top of the woodland food chain is the omnivorous fox (Vulpes vulpes).

This beautiful native mammal, with its red fur and bushy tail, has a diet of rabbits, rodents, insects, birds and berries.

A member of the dog family (Canidae), foxes are most active around dawn and dusk.

In our gardens, these rural creatures lead a secretive life and will trot away if disturbed by human presence.

Our wild foxes often use old underground badger tunnels as a place to breed. Foxes live in family groups consisting of the male, female and their young. They mate in winter and give birth to a litter of cubs in spring.

We at Wakehurst found one resourceful fox sleeping in our hay barn throughout winter.

We have three species of owl living here at Wakehurst; the tawny, barn and little.

The tawny owl (Strix aluco) inhabits our woodlands. Distinct by its round head, brown-grey feathers and large dark eyes, this bird is a silent nocturnal hunter.

Its wing feathers have soft fluffy edges that allow the owl to fly without making a sound. This comes in very handy during the hunt for mice and voles, the tawny owl’s main food.

Keep your eyes peeled as you wander through our woodlands. You may spot signs of the tawny owl, including pellets containing the remains of their prey, or even an owl roosting in a tree during the day.

The barn owl (Tyto alba) prefers our meadows as they hunt for small mammals living in open grasslands.

This stunning species has bright white feathers and a heart-shaped face.

Like the tawny owl, barn owls are silent in flight.

Listen out for their distinct high-pitched screech. If you’re lucky, you may also spot one as this species is known to hunt in daytime, especially towards dusk.

The third wild owl species living in our landscape is the little owl (Athene noctua).

Found in our historic parkland, this miniature bird has piercing yellow eyes and mottled brown and cream feathers.

Its size matches its name; the little owl is the smallest owl in the UK with a height of only 20cm.

This species mainly hunts for small mammals and birds at dawn and dusk.

Can you spot this feathery creature on your next visit to Wakehurst? In daylight, they can often be seen perching on a tree branch, fence or pole.

As with all owls, these three species have an impressive skill. They can all turn their heads 270 degrees and look behind them!

Slithering across our gardens are grass snakes (Natrix helvetica). But don’t worry, these green and yellow reptiles are harmless.

This nonvenomous species is Britain’s most common and longest snake, and can reach to over a metre in length.

They eat amphibians such as frogs and toads, fish, small mammals and birds, swallowing their prey whole (and often still alive).

Living in woodland, wetland, grassland, and farmland, this shy cold-blooded animal is often much closer to you than you think and will slither away if disturbed when basking in the morning sun.

The wild badger (Meles meles) is the biggest land predator in the UK.

Elusive and shy, these black-and-white mammals are nocturnal so hide during the day, coming out soon after dusk.

They live in labyrinthine setts, burrow systems they create by digging. Their preferred habitat is a mixture of woodland and open country.

Badgers are voracious omnivores and expert foragers. You may notice signs of their presence when walking around our gardens.

Look for footprints, holes and scratch marks in the soil where the creatures have been digging for their favourite food, juicy earthworms.

Heaps of excavated material can also sometimes be found outside the setts' entrance holes, made up of soil and old bedding material.

Can you spot signs of these wild animals on your next visit to our gardens? 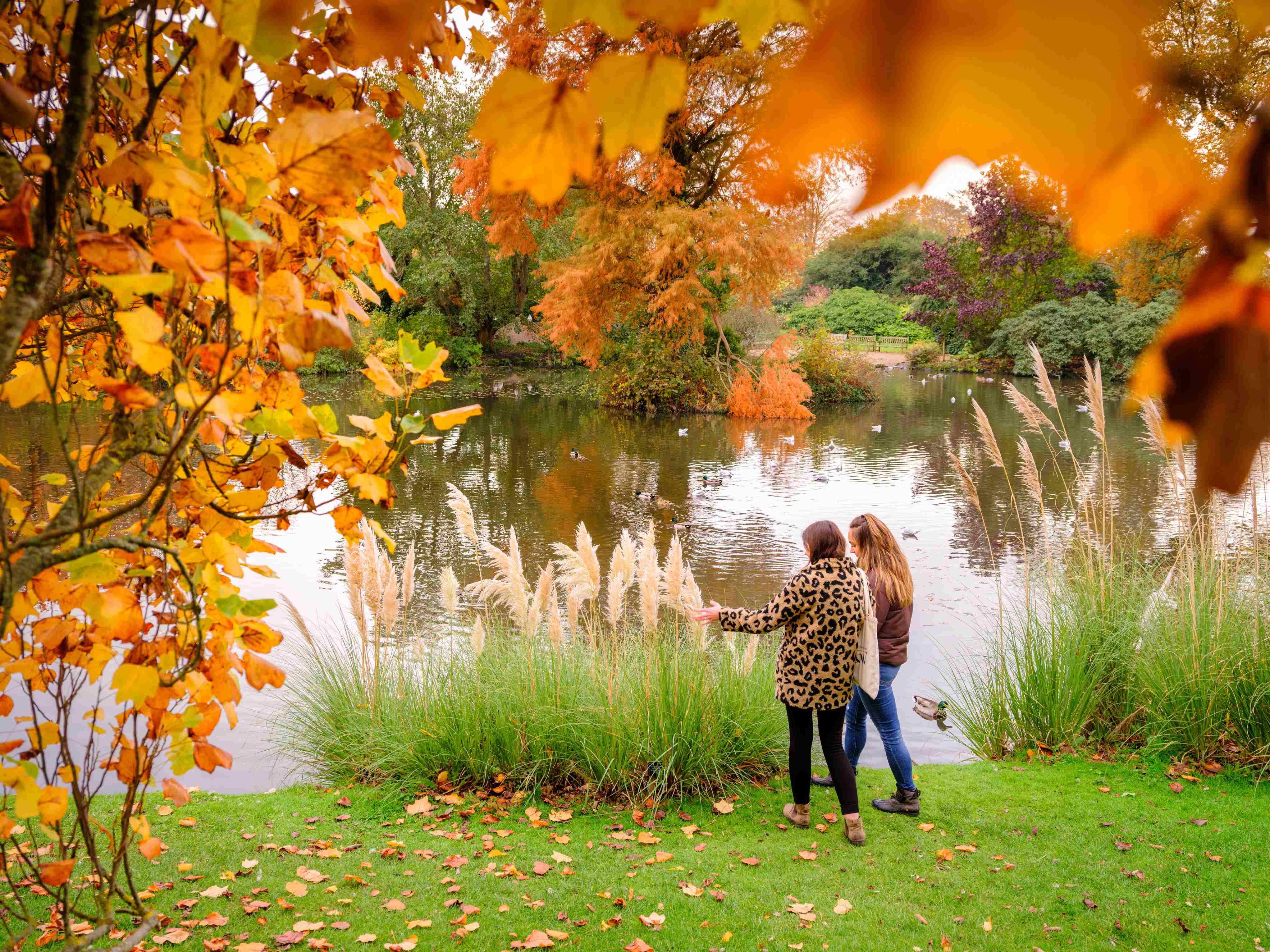 Find out how you can make the most of your day exploring our wild botanic garden.