Our gardens are open for you to relax and enjoy the fresh air. Our shops and restaurant outdoor seating areas are open, but the rest of our buildings are closed. Book a time slot to Kew Gardens or Wakehurst before you come.

Find out more about the UK's favourite spring flowers and where to spot them at Kew Gardens.

Colourful blooms are popping up all around us, a sure sign that spring is on the way.

Find out more about your favourite spring flowers, how to identify them and where to spot them at Kew Gardens.

Crocus (Crocus) are from the iris (Iridaceae) family. They flower mainly in late winter and early spring, and come back year after year.

Look out for their tube-shaped flowers, which grow from low growing, bulb-like structures called corms.

Crocuses bloom in a range of colours, from bright oranges, pastel pinks and mottled purples. They grow in a range of conditions like woodlands, coastal gardens and lawns.

They provide an important source of nectar for pollinating insects when they emerge from hibernation.

See beautiful crocus in our Woodland Garden and Arboretum in March.

One of the UK's favourite spring bulbs, daffodils (Narcissus) are well known for their bright yellow flowers with trumpet-like centers.

In the UK, daffodils are sometimes called lent lilies as they often bloom between Ash Wednesday and Easter.

They are not actually lilies but belong to the Amaryllidaceae family, which is the same plant family as snowdrops.

Daffodils have been bred a lot over the years. Although there are only 36 species in the wild, there are a staggering 26,000 cultivated varieties.

At Kew, see daffodils along the Great Broad Walk Borders, surrounding the Temple of Aeolus and in the Natural Area. March is the best time to enjoy them.

Primrose (Primula vulgaris) are a small woodland plant and one of the first signs of spring in wooded areas. It's thought this is where their name comes from, as 'primus' means 'first' or 'early'.

They flower as early as December and as late as May. Look out for their pale yellow flowers and notched petals.

In Irish folklore, these pretty flowers were thought to represent eternal love and were placed at the doorway to protect the home from fairies.

See primrose and other woodland highlights in our Woodland Garden and the Natural Area.

Snowdrops (Galanthus nivalis) are one of the first winter flowers to pop up from the ground and decorate parks and woodlands with their delicate white blooms.

Their Latin name means 'milk flower of the snow' and they have long been associated with the winter time.

They flower between January and March, often at the base of trees and in other shaded areas.

Snowdrops are so popular with plant lovers that there's a specific name for snowdrop collectors, ‘galanthophiles’. Desirable snowdrop bulbs can be sold for up to £350 per bulb.

Spot them in our Rock Garden and Natural Area.

Tulips (Tulipa) are part of the lily family (Liliaceae). Look out for their star-shaped flowers and long pointed leaves.

Although they are often thought to come from the Netherlands, many tulip species originate from Central Asia where they grew wild.

They were first cultivated in Turkey and became popular there in the 16th century. They were a favourite flower in the opulent gardens of Ottoman sultans.

The beauty of these flowers sparked interest in 17th century Europe, where demand skyrocketed as everyone wanted the fashionable flowers for their gardens.

In the Dutch republic, tulips became an expensive luxury item where they were traded for huge sums of money. At one point, they cost more than diamonds and houses.

The market eventually suffered a huge collapse and was one of the first examples of an economic boom and crash.

Although they're no longer more expensive than diamonds, tulips are still highly prized by gardeners for their striking variety of colours and shapes.

Most tulips bloom in April and May. Look out for our dazzling displays on the Broad Walk Borders and in the Palm House beds.

Hellebore (Helleborus) flower from late winter to early spring, which is where their common name 'Christmas rose' comes from.

Although the flowers resemble roses in shape, they actually belong to the buttercup family (Rannunculaceae). Look out for their pretty drooping flower heads, which can be white, yellow or pink.

They thrive in woodland areas, and do well in shady spots as well as sunny positions.

They're popular with insects as the downward pointing flowers protect them as they feed on pollen.

Be careful with these flowers if you have children or pets, as they contain a toxin called protoanemonin. This toxin makes the plant taste bitter, which protects is a handy protection against peckish predators like deer.

See displays of hellebore in our Woodland Garden and the Great Broad Walk Borders.

Magnolias range in size, from small shrubs to large trees. They are well known for their stunning star-like flowers, ranging from pure white to deep pink.

They are slow-growing and can take up to 20 years to reach full size. Depending on the variety, flowers can appear between February and June.

At Kew you can see mass flowering near the Orangery and in the Aboretum.

Look out for the magnolia campbellii, or 'Pink Tulip Tree', which is one of the first magnolia trees to bloom in the Gardens between February and March.

Bluebells are best known for creating a dazzling carpet of blue in woodland areas.

The bluebell is actually a herb that grows from a bulb. The bell-shaped flowers are a favourite with bees and butterflies which feed on the rich nectar.

Over half of the world's population of bluebells grow in the UK. Our 300 year old woodland in the Natural Area is home to one of London's best bluebell woods.

The flowers usually bloom between April and May. See what birds and wildlife you can spot while you wander beneath the trees.

Displays of white and pink cherry blossom have become synonomous with spring.

In Japan, thousands of people gather at cherry blossom festivals to admire the show of colour, in a tradition called hanami (flower viewing).

They are considered the national flower of Japan. They symbolise life, hope, and good health.

At Kew, see the best displays on Cherry Walk that runs from the Rose Garden behind the Palm House to the Mediterranean Garden.

The best time to see them is in April and May, but be aware the weather can impact when they bloom. 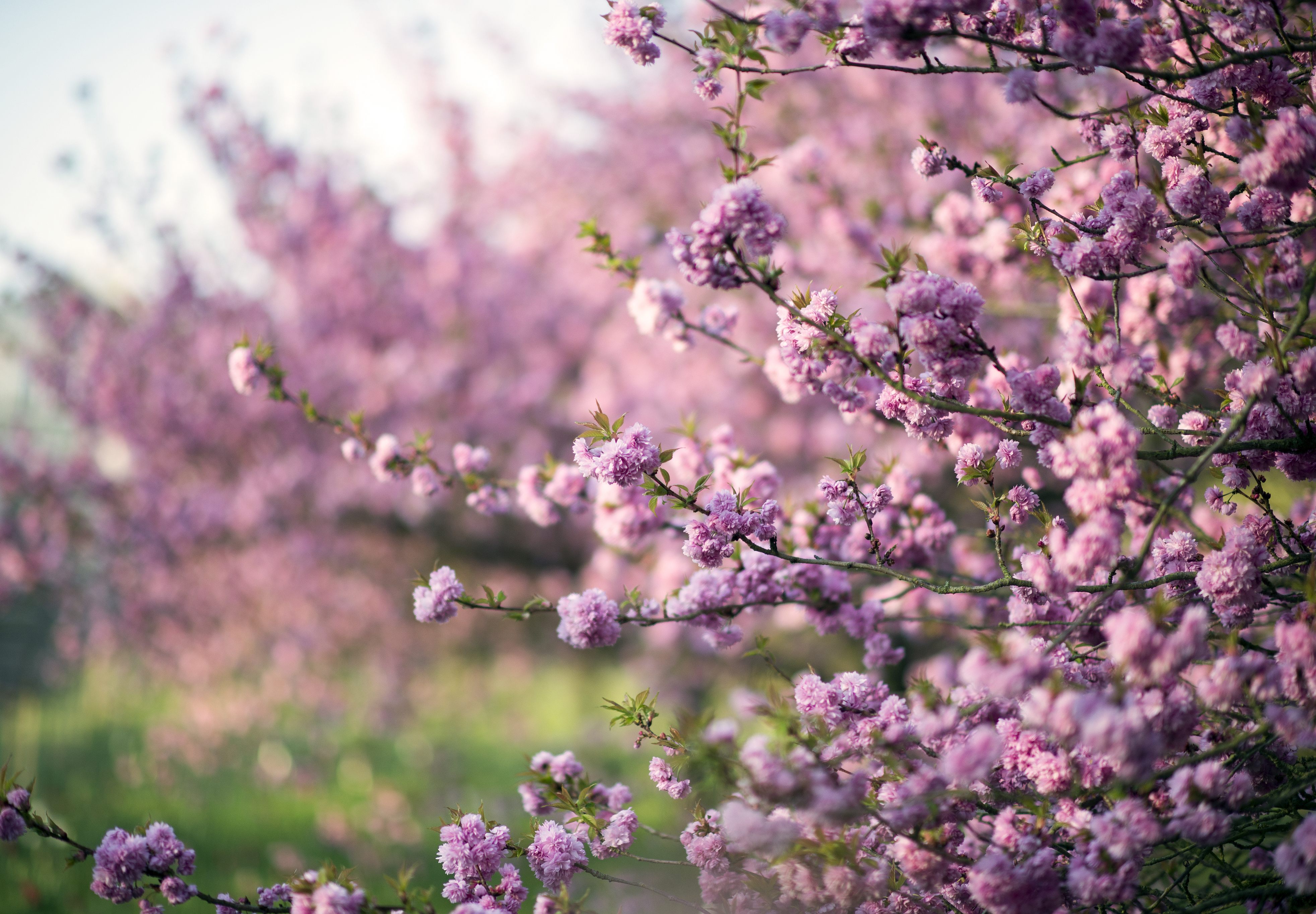 Immerse yourself in spring at our beautiful botanic Gardens.