4 reasons to dine at our new Pavilion Bar and Grill

Head to our exciting new eatery, the Pavilion Bar and Grill, for year-round dining among the trees and a slice of fascinating history.

There’s a brand-new food destination here at Kew. Fresh, contemporary and with plenty of space to relax both inside and out, the Pavilion Bar and Grill will be open year-round. Here’s why you should turn left next time you come in through Victoria Gate.

1. Dine among the trees

The Pavilion Bar and Grill sits in the heart of the Arboretum, Kew’s vast collection of 14,000 trees.

Latin for ‘a place with trees’, the Arboretum is a unique living collection shaped by the seasons.

Our new eatery is the perfect place to sit in comfort, revive your senses and watch the trees change with the year. With floor-to-ceiling windows, a vast outdoor terrace covered with decades-old original vines and a beautiful new planted landscape, our state-of-the-art building has been designed so you can celebrate the great British outdoors, no matter the weather.

After you’ve had a bite to eat – or picked up a picnic –  spend some time in this quieter corner of the Gardens. Look out for rare and ancient varieties of trees and for our famous record-holders, such as the coastal Redwood (Sequoia sempervirens) which, towering at 40 metres tall, is Kew’s tallest tree. That’s the height of a 13-storey building!

You can watch our chefs prepare your dish with fresh, seasonal, local ingredients. Unique among Kew’s restaurants, our Pavilion Bar and Grill chefs create your meal in our central open kitchen.

You can choose from a range of delicious mains all cooked on our grill and served with sides, salads and puddings made from ingredients foraged right here at Kew. Your dish will be cooked using DEFRA-approved charcoal and woody waste from the Gardens.

For for the more adventurous (and adult), you can try a shot of Kew horseradish vodka.

3. Take a seat in history

The original Tea Pavilion was the first and oldest place at Kew to sit with a cuppa (and eventually, once an alcohol licence was granted in 1937, something stronger).

In 1888 it opened with a special feature made of the ‘Shilling Tea’ (tea, bread and butter, jam, cake and salad) and the ‘Cold Collation’ lunch (a variety of cold meats, veal and ham pie, cheese, and bread and butter).

Our archives reveal a treasure trove of letters and comments from diners down the decades, including a1965 complaint that Kew’s cucumbers 'were an unusual hue that was letting the country down'. A Kew official replied they were ‘a fine shade of green and available for inspection at any time!’

The Tea Pavilion was famously burned to the ground by suffragettes Olive Wharry and Lilian Lenton in February 1913.

It happened just a week after Lilian and her group broke into the glasshouses and destroyed many rare and valuable orchids. Escaping undetected, she returned with Olive. The two of them forced the door of the Pavilion’s simple wooden building, littered the floor with paraffin-soaked tinder, put a match to it and fled amid a flutter of suffrage pamphlets. The whole building was ablaze before they reached the boundary wall.

Olive and Lilian were caught soon afterwards and sent to Holloway, where Lilian managed a covert hunger strike that lasted for 29 days. Lilian’s activity over the following 18 months lent her the nickname ‘the tiny wily, elusive Pimpernel’.

The action at Kew was part of a wave of suffragette agitation that swept the country following the government’s decision to withdraw from the Franchise Bill, a bill that many hoped would finally usher in the vote for women.

The Pavilion Bar and Grill is just a stone’s throw from the newly restored Temperate House, the world’s largest Victorian glasshouse.

A magnificent, Grade I-listed building, inside you can discover some of the world’s rarest and most threatened species of plant.

The eighteenth-century splendour of the Great Pagoda is a similarly beautiful sight to enjoy during lunch. Make sure to book a trip inside during the summer season and enjoy one of the earliest bird's-eye views of London.

For art lovers, the Pavilion Bar and Grill is moments from two of Kew’s botanical artistic gems: the Marianne North and Shirley Sherwood Galleries.

Did you know, Marianne North defied Victorian convention, travelling the world solo to paint the exotic plants that captivated her?

Over 800 of her works now line the walls of the Marianne North Gallery.

Next door, the Shirley Sherwood Gallery shows exhibitions and installations of Botanical Art from both Kew's collection of over 200,000 pieces of artwork, and Dr Sherwood's extensive personal collection. The world’s first public gallery of its kind, it’s unmissable for novices and experts alike. 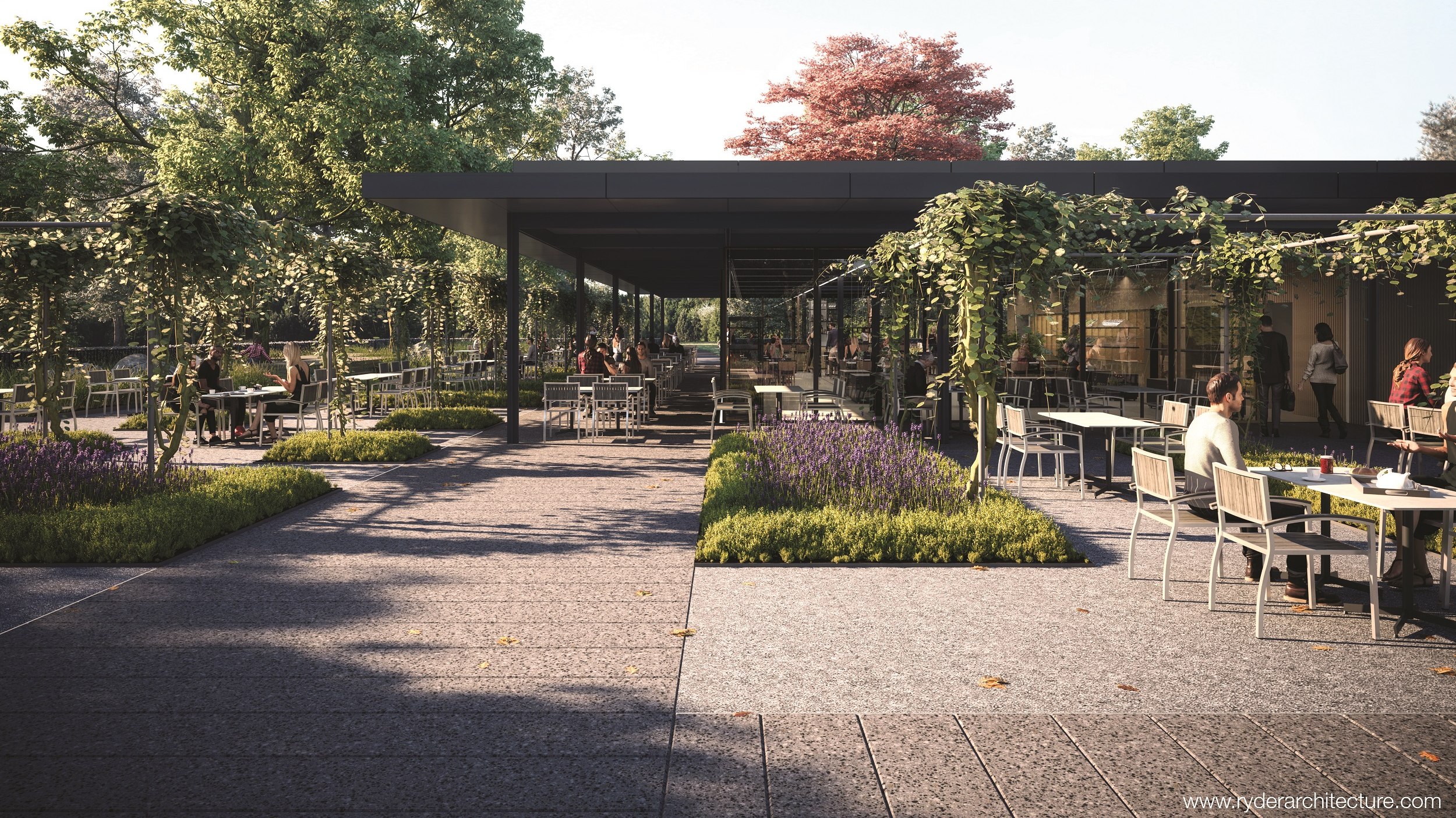 Grilled food in an impressive and contemporary building, the Pavilion Bar and Grill is perfect for alfresco dining with views of Temperate House and the Pagoda.