Observations on a strange vegetable - the snake gourd

He may be a Seed Morphologist but Wolfgang Stuppy of Kew's Millennium Seed Bank discovers there is more to the snake gourd than just some strange fruit and eccentric seeds.

Being a great fan of weird and wonderful food plants, I want to start this year’s round of blogs about interesting fruits and seeds with an enigmatic vegetable. It is called the ‘snake gourd’ or, if you prefer Latin, Trichosanthes cucumerina var. anguina. Probably originally domesticated in India, the wild form of the species (Trichosanthes cucumerina var. cucumerina) is native to southern and eastern Asia as well as to Australia and the islands of the western Pacific. Nowadays, snake gourds are also cultivated as a minor vegetable in parts of Africa, Madagascar and other tropical and subtropical regions. 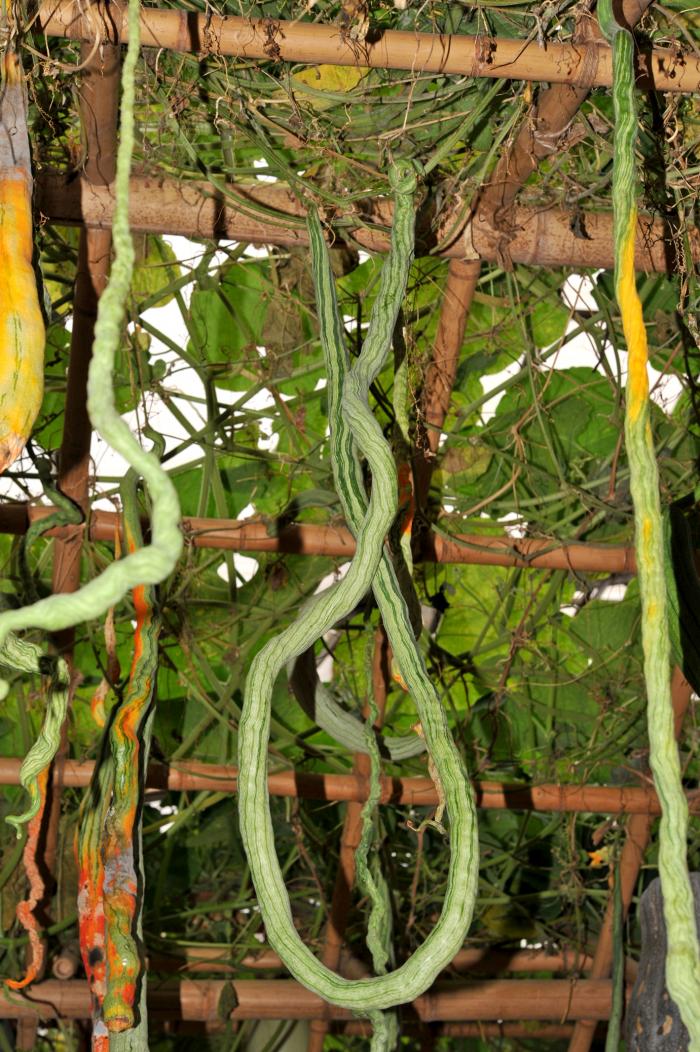 As always, size does matter

Like other gourds, the snake gourd is a member of the pumpkin family (Cucurbitaceae) and has seeds similar to its cousin the water melon (Citrullus lanatus), although slightly more eccentric, sporting a jagged-wavy outline. Far more curious than its seeds are the snake gourd’s fruits. As the name implies, they are very (!) long, slender and often wriggly like a snake. The fruits can easily reach 1.5 m in length and in 2010 someone in Oman claimed to have grown the longest snake gourd ever at 1.88 m.

By the way, the officially longest gourd in the world was a ‘luffa’ (also ‘loofah’) or ‘sponge gourd’ (Luffa aegyptiaca; syn. L. cylindrica) grown in China in 2008 which measured 4.55 m. Imagine how many scrubbing bath sponges you could cut from that whopper loofah!

Like luffa gourds, snake gourds are eaten as a vegetable when very young, although they both taste rather bland. As snake gourds get older, their flesh becomes tougher and more bitter and their rind turns dark red and hardens. Curiously, fully mature snake gourds are tough enough to be turned into didgeridoos. Inside they contain a soft, red, tomato-like pulp that can be used as a tomato-substitute in cooking.

Confessions of a Seed Morphologist

At this point I have a confession to make. I have actually never eaten a snake gourd in my life.

Worse even, the reason that I write this blog is not because I find the fruit or the seed particularly ‘cool’. It’s actually the flower of the snake gourd that completely blew me away when I first saw it and so I decided to find a way to share my excitement with you (as a Seed Morphologist I am not really eligible to blog about flowers!).

A few years ago I grew a cucumber-like vine in my conservatory at home from a packet of seeds I purchased in Chinatown. Finally, when the first flower bud began to open in the early evening, I noticed that something strange was going on. In fact, the unfurling of the flower bud was so amazing to watch that I decided to spend the night in the conservatory together with my camera and tripod. By nature, botanists are easily excited when it comes to plants, but whether you are into plants or not, you have to admit that the following photographs show something truly breathtaking:

During the course of a night, the bud of a snake gourd slowly unfurls into a beautiful white and strongly scented flower fringed with long, lace-like tendrils. Their shape, colour and scent, as well as their nocturnal opening, clearly indicate that the snake gourd’s flowers are moth-pollinated. Graceful and delicate, yet highly ephemeral, the little beauty lasts for just a single night but to me this is one of the most remarkable flowers in the world, and it belongs to a vegetable! 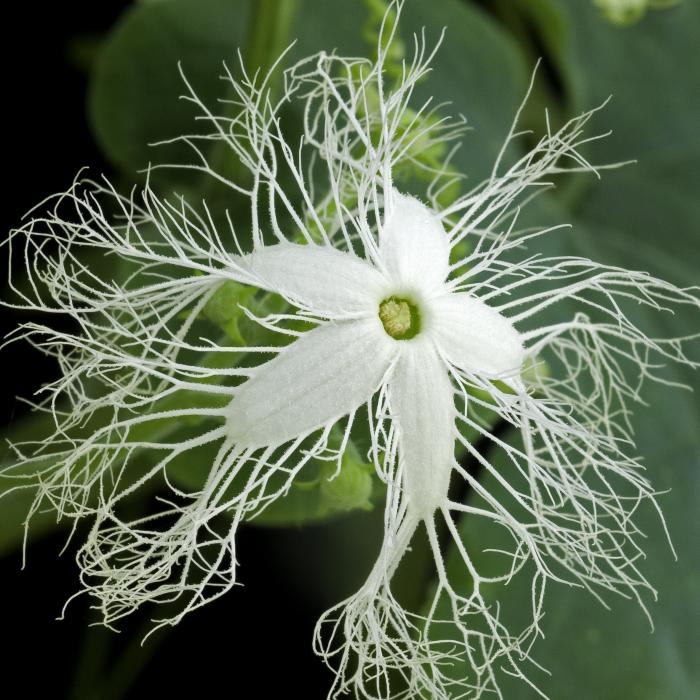 Acknowledgements
I want to thank my friend and colleague, Jie Cai, from the Kunming Institute of Botany in Yunnan, China, for photographing the snake gourds growing in their glasshouses, specifically for this blog.

After publishing this post I was contacted by Adam Ismail Arbi from Botswana. Adam runs ‘Adams Apple’, a farm where he grows snake gourds and a wide range of other vegetables.

The snake gourds are grown in a 300 square metre polytunnel at ‘Adams Apple' A weight (a rock) is tied to the end of the snake gourd to ensure that the fruit grows in a straight shape rather than ‘wriggle’ around as it would normally do.

Adam sells the fruit by weight. The gourds are not packed or wrapped, and sent to customers as they are.

The gourds are collected and wrapped by staff in Adam's warehouse. Adam told me he’s been growing snake gourds for 5 years. His ambition is to grow the longest snake gourd ever!

Good luck, Adam, and many thanks!