Two new ground-breaking publications from researchers across Kew Science and 50 global partners highlight Madagascar’s incredible biodiversity and the optimistic future ahead if we grasp opportunities to save it.

Over the last 80 million years in near total isolation, Madagascar has become home to a unique assemblage of wildlife that makes it one of the most biodiverse hotspots on our planet.

The threats to biodiversity in Madagascar – and by extension, the threats to our planet – are poised to overtake us if we’re not quick to describe, understand and therefore conserve and restore Malagasy species and ecosystems. In the urgency of the moment, we here at Kew have collaborated with 50 organisations around the world to produce two new papers in the journal Science, highlighting the past, present, and future of Madagascar’s wildlife, and how we can protect it.

The defining aspect of Madagascar’s biodiversity is its uniqueness. Within vascular plants alone, 82% of the 11,516 native described species found in Madagascar are found in the wild nowhere else on Earth, making them ‘endemic’ to the country. Within vertebrates in the animal kingdom, this percentage is even higher, at 90%.

Entire ecosystems in Madagascar contain irreplaceable and ecologically intertwined species. Some of these, if removed, could accelerate or trigger the demise of others. Our understanding of the bigger picture is accelerating, with more species scientifically described than ever before. However, for some groups of life, evolutionary history and present diversity remain to be explored. This means there is a risk of losing species before they are even known to science.

Estimating not only the presence of scientifically described species and their levels of endemism, the first of our two publications examines deep evolutionary history and how biodiversity has changed in relatively recent times. Arriving at least 2,000 (and possibly up to 10,000) years ago, humans have caused the extinction of certain species in Madagascar, including elephant birds and tortoises, either by direct consumption or indirectly by exploiting their habitats, and in recent decades, these human impacts have continued and increased.

But, like everywhere on Earth, humanity itself is reliant on the local biodiversity to survive.

Our findings show that of the 40,283 plant species known to be used by humans worldwide, 5% of them (1,916 in total) are found in Madagascar. Of these, 1,596 are endemic. These include plants with medicinal properties, numerous food plants, and species with more modern uses such as mitigation against climate change.

Biodiversity loss on Madagascar affects the future of people, just as it affects biodiversity itself. The major causes of decline however, are human-linked, and there are ways we can address them.

Botanical institutions such as Kew, our partners, and zoological institutions focusing on the conservation of animals have carried out an enormous amount of work to classify and safeguard species from extinction ex situ (outside of the wild). But, for a secure long-term future, the challenges in situ must be tackled too, led in large part by the Kew Madagascar Conservation Centre team and other actors in Madagascar.

Madagascar is economically one of the poorest countries in the world. Threats to biodiversity – ranging from land use change to the wildlife trade – are rooted in historical as well as modern social contexts, and widespread inequality. There can be no doubt of the scale of the pressures either. We estimate that overexploitation and unsustainable agriculture threaten between 62.1% and 56.8% of vertebrates respectively. The two together endanger 90% of all plant species.

We cannot lose hope despite the challenge. There are bottom-up solutions to be found that address the needs of people and the needs of nature together. Biodiversity is an immense resource for the future of this island nation, just as biodiversity itself is reliant on change in human practices to survive.

In our second publication, we present five such opportunities for change in the years ahead.

Solutions – The future of biodiversity in Madagascar

1) We must invest in conservation and restoration that is based on evidence and effectiveness, and tailored to meet future challenges through inclusive solutions.

Since the 1980s, billions of US Dollars have been dedicated to Malagasy conservation, but not all interventions have been evaluated to understand their effects, nor have they involved all relevant in-country stakeholders, from local communities to regional and national authorities. If both issues are corrected, the potential for real impactful conservation supporting both people and wildlife is enormous.

In our Tropical Important Plant Areas (TIPAs) Project, careful evidence-based research is combined with the involvement and engagement with the knowledge of those for whom the region is home.

The data we’ve reviewed is vast, and sufficient to characterise major challenges and identify priorities. What we do need to do urgently however, is fill in the gaps in understudied ecosystems and taxa. There are huge knowledge gaps, particularly in groups such as fungi and insects, and many new species are identified to be at the very brink of extinction. Getting ahead of the curve can make all the difference for biodiversity.

At Kew we’ve been able to use artificial intelligence to predict the conservation status of plant species, both in these publications and elsewhere.

The fact that 97.1% of terrestrial and freshwater vertebrates, 67.7% of plant species, and 10.4% of Madagascar’s land area are safeguarded by a network of protected areas is an astounding achievement. Although the global target being discussed at the COP15 meeting in Montreal of protecting 30% of the world’s land surface by 2030 is in most cases well substantiated, it is probably more efficient to focus on enhancing Madagascar’s existing protected areas rather than creating new ones. Doing so has the potential to yield enormous benefits for population numbers of wild species and their geographic ranges.

The Kew Madagascar Conservation Centre team are working with communities in the Itremo Protected Area on the future of its protection through stewardship.

4) Conservation and restoration should not focus solely on the protected areas network but should also include the surrounding landscapes and communities.

As well as forming an island of biodiversity in a sea of degraded resources, protected areas are a lifeline to the communities who live as part of them and surrounding them. Excluding these communities is incompatible with a biodiversity positive future, whereas increasing the ecosystem provisions of surrounding areas to include elements such as food production, soil quality and water access are far more likely to support the protected areas themselves. These activities must involve local communities from the very beginning, right from the planning stage and through to implementation, to increase suitability and rates of success.

Diversifying the use of edible food plants in Colombia holds great potential for both food security and biodiversity in the country.

5) Conservation actions must address the root causes of biodiversity loss, including poverty and food insecurity.

The reality of our analysis is that overexploitation and agriculture (particularly as a driver of forest loss) are the greatest threats to the future of Madagascar’s biodiversity. The challenges are beyond doubt tied to issues of food security, health, food access and more. If all stakeholders can together recognise this and craft initiatives focused on already promising solutions such as green entrepreneurship, education, and sustainable agriculture schemes, a bright future lies ahead for the livelihoods of many, and the protected biodiversity alongside them.

Increasing the resilience and sustainability of crop practices in Mexico can help create a food-secure and biodiversity-friendly future under a changing climate.

Achieving a sustainable future that benefits people, biodiversity and climate is possible by building on the knowledge and practices already established. The path ahead for Madagascar’s biodiversity is very bright indeed, if we make the changes now. 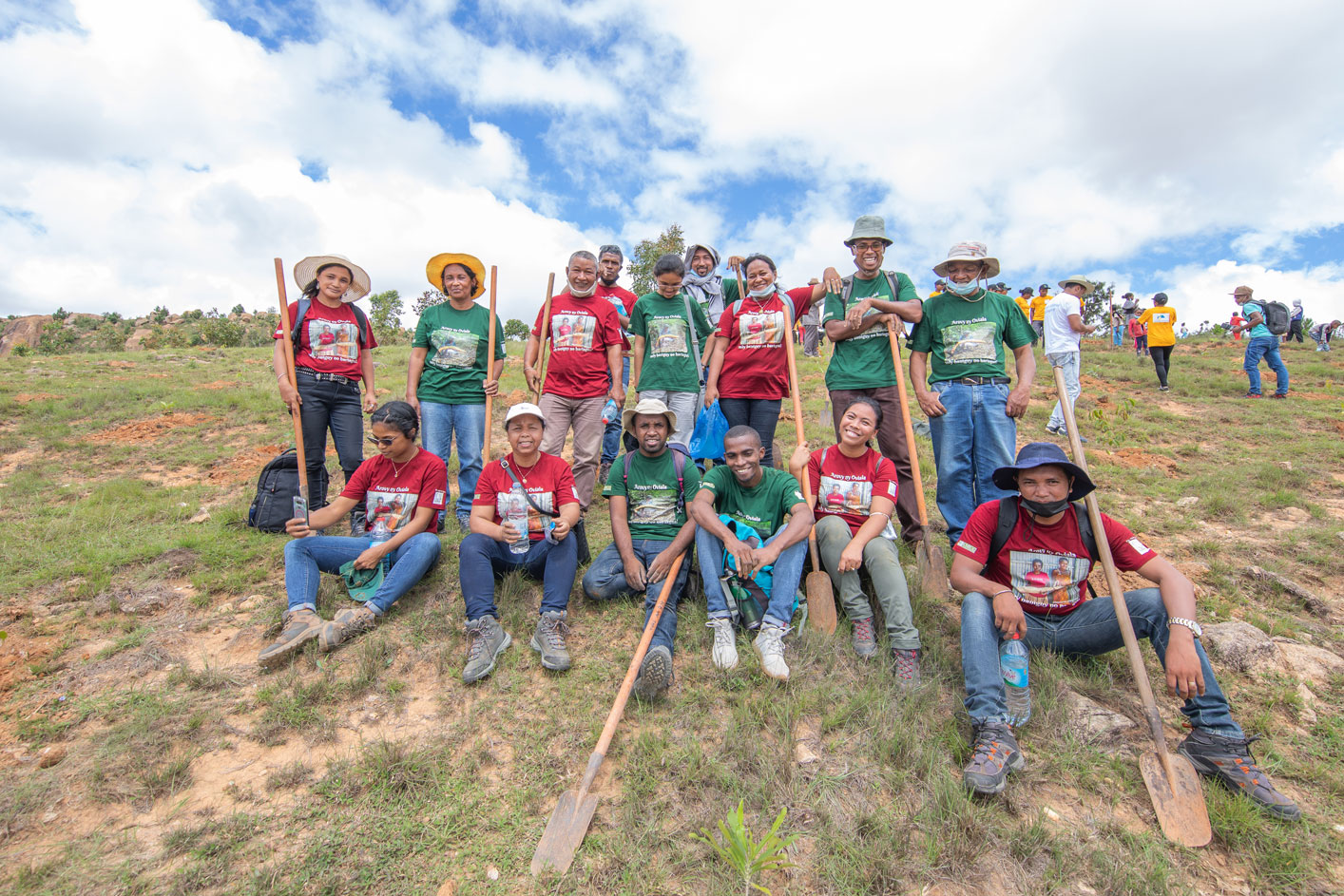 At the heart of our efforts to support biodiversity and communities in Madagascar lies the people making it happen.