Leafing through the archives

After visting Musami Yamanaka's exhibition of Kew's Heritage Trees at the Shirley Sherwood Gallery of Botanical Art, I have been looking at some of the notable illustrated works on trees we hold within Library, Art and Archives.

The Arboretum at Kew has flourished over time from its Georgian origins. Over time it has built up its collection with many new species, most of which are now a familiar sight throughout Britain. The Illustrations Collection holds work by some of the early artists associated with the Gardens such as Georg Dionysius Ehret who illustrated the horse chestnut Aesculus hippocastanum when it was still a relatively rare tree in Britain. 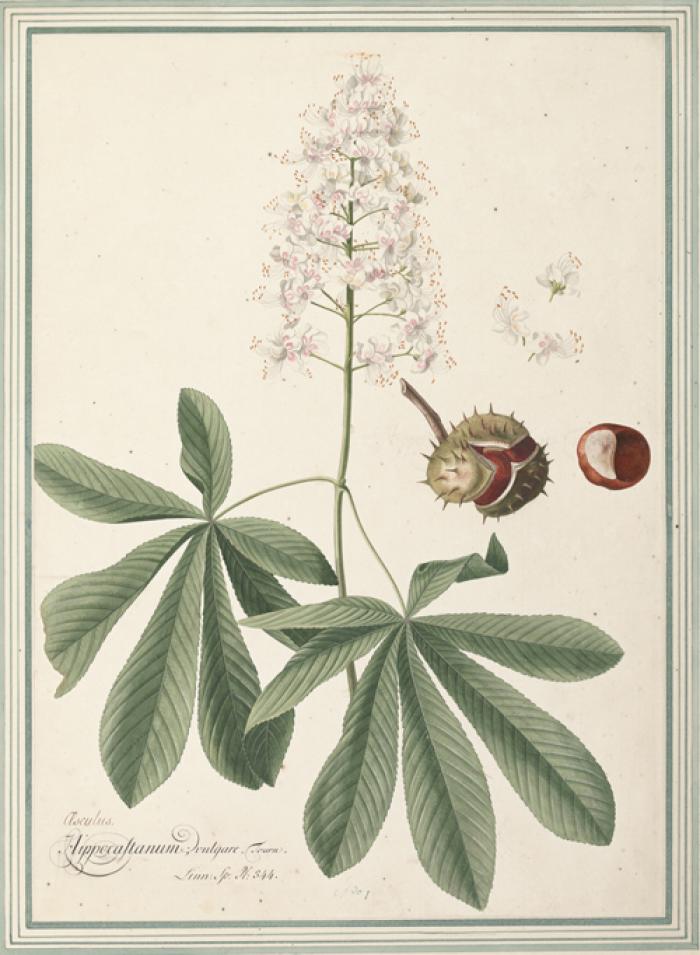 William Chambers’ Plans, elevations, sections and perspective views of the gardens and buildings at Kew in Surrey, 1763, features an idealised view of the Lake which shows how important the placement of trees are within the Arcadian landscape. 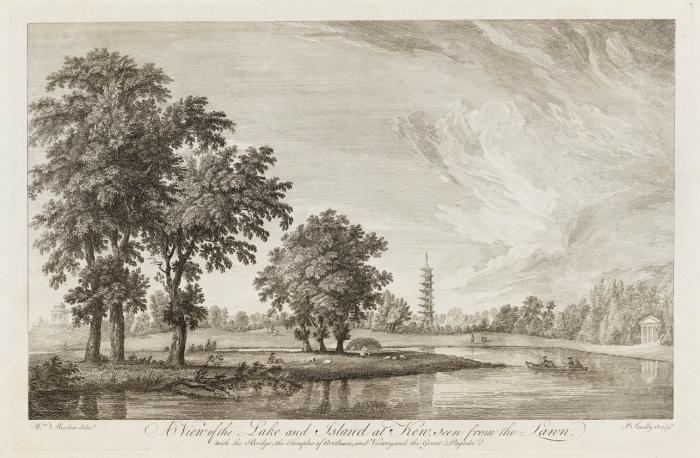 The Gardens took shape under the direction of Princess Augusta and her advisor Lord Bute. Ray Desmond’s History of Kew highlights the specimen of sweet chestnut, Castanea sativa, on the south side of the Lake as a contender for the title of oldest tree in the Gardens. The artist Margaret Meen was directed by Bute to record many of the plants growing at Kew and illustrated the sweet chestnut, although it is unclear whether she worked from a specimen at Kew. 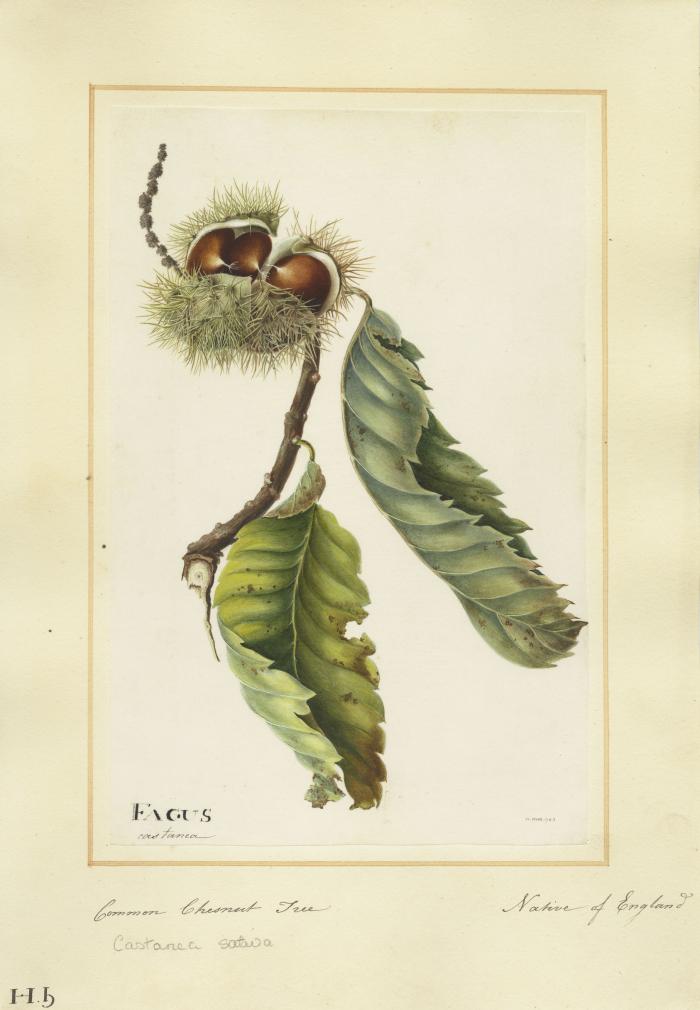 Masumi Yamanaka’s exhibition at the Shirley Sherwood Gallery of Botanical Art features many of the so called ‘Old Lion’ trees. These were transferred to Kew by Lord Bute from the Duke of Argyll’s estate in 1762 and today are the oldest trees with known dates at Kew.

One such tree dating from around this period is the plane tree, Platanus orientalis, which stands close to the Orangery. Kew holds a proof plate illustrating this species by the renowned artist Ferdinand Bauer for John Sibthorp’s revered publication Flora Graeca; documenting the flora of the eastern Mediterranean. 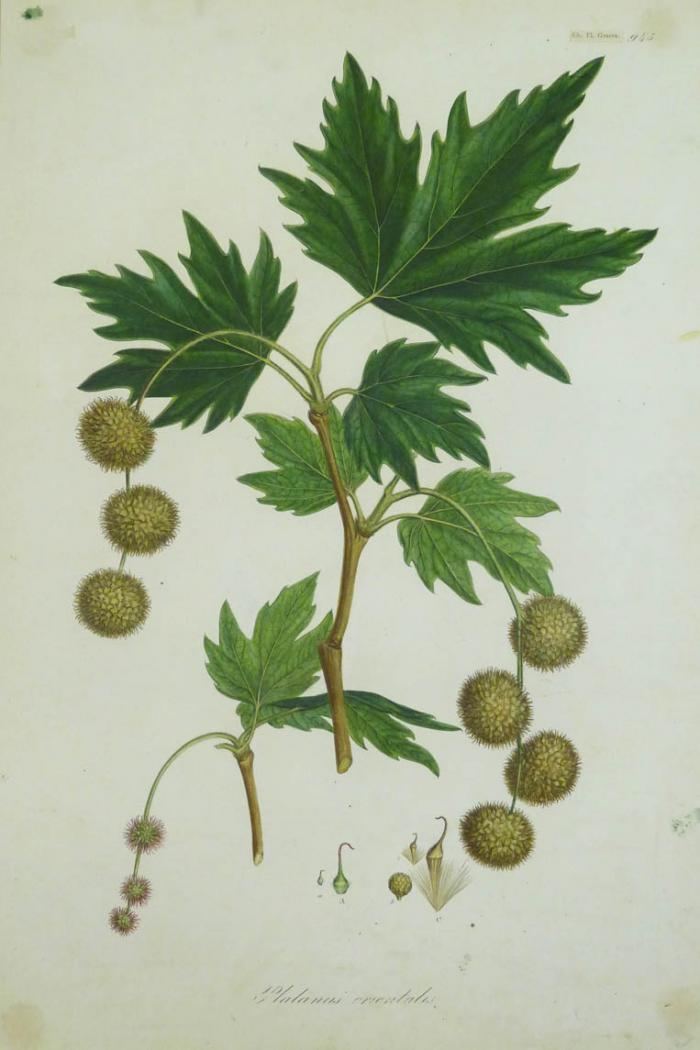 Lord Bute also introduced the Ginkgo biloba into the Gardens in the 1760s, the tree was first imported to Europe from China 30 years earlier. Our collection holds a number of images of the Ginkgo including a fine example by an unknown Chinese artist commissioned by the 19th Century botanist Robert Fortune. 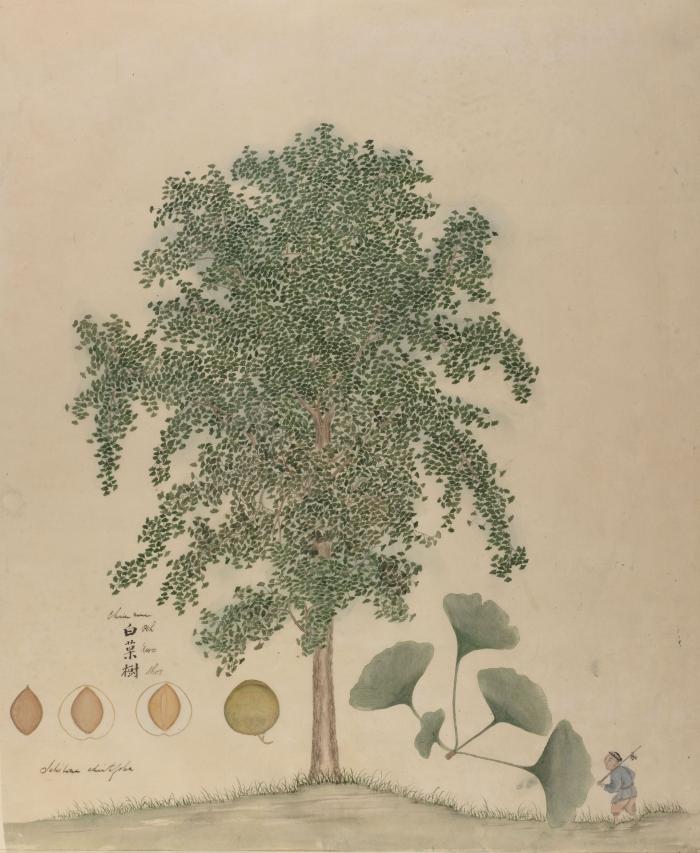 Kew is fortunate to hold some original illustrations by the celebrated illustrator Pierre Joseph Redoute for Andre Michaux’s Histoire des chênes de l'Amérique, 1801. These monochrome studies were the result of an expedition to document the trees of North America in order to identify potential species with which to repopulate the French countryside. 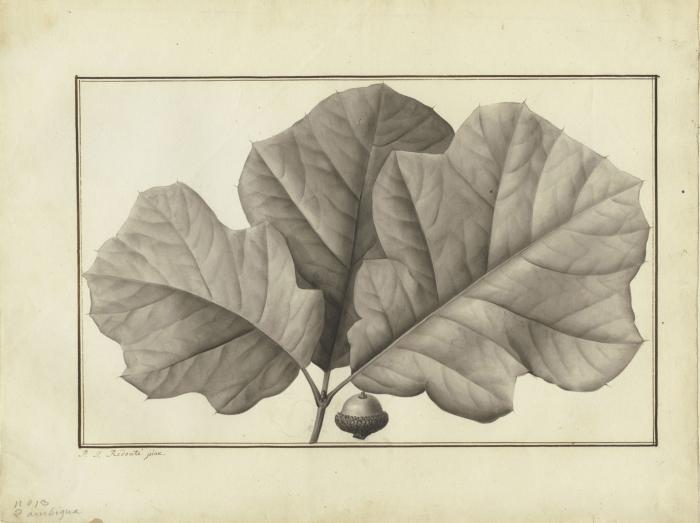 The botanist Aylmer Bourke Lambert (1761-1842) had already published an important text on the anti-malarial tree Cinchona in 1797. Illustrations were added to this in 1821 when he produced his acclaimed work A description of the genus Pinus in 1803-1824. Both publications were primarily illustrated by Ferdinand Bauer. Some of the specimens illustrated were received from Lambert’s friend, and advisor at Kew, Sir Joseph Banks and were noted to be growing in the Gardens. The plate of the Weymouth Pine, Pinus strobus , is described in the text as ‘taken from a fine tree growing in the Royal Garden at Kew’. 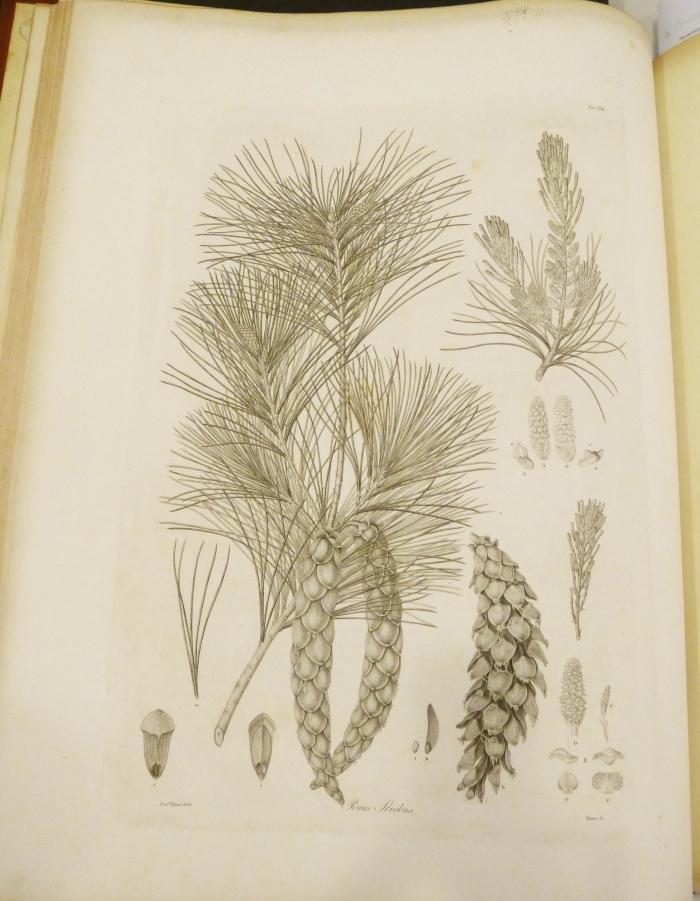 Trees found within the British Isles

Some late 19th Century publications focussed their attention on trees growing within the British Isles. Kew holds a number of original illustrations by W. Richardson for Edward Ravenscroft’s The Pinetum Britannicum (1863-1884). A number of these are playfully illustrated with figures in Victorian dress which serve to give an idea of scale to the specimens they record. 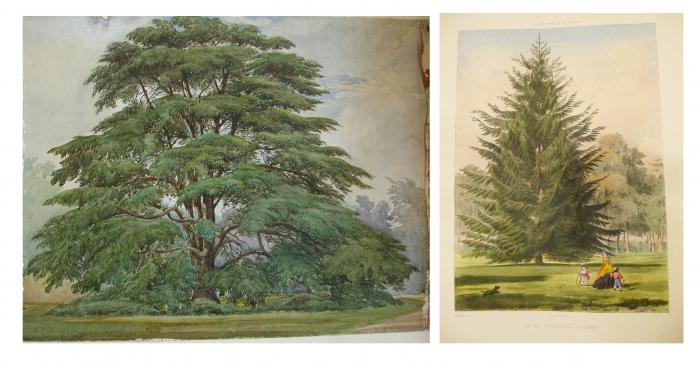 Henry John Elwes’ (1846-1922) travelled far and wide to document every hardy species of tree grown in the British Isles in his Trees of Great Britain and Ireland (1900-1913). Copiously illustrated with photographs, volume 5 features an image of a fulham oak taken in the Gardens at Kew. The Temple of the Sun (which has since been demolished) can just be glimpsed through the foliage. 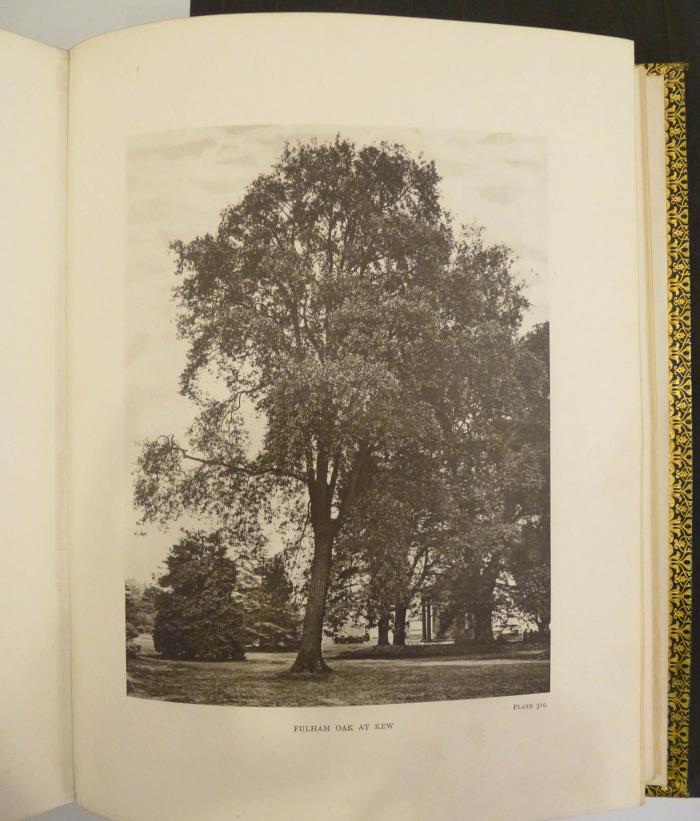 Botanists and artists continue their fascination with documenting the varied tree genera and species, and the illustrated books and artworks held in the Library, Art & Archives are testament to their interest in this subject.

Masumi ‘s exhibition on Kew’s heritage trees can be seen in the Shirley Sherwood Gallery from 21 February 2015 to 9 August 2015 (open every day excluding Mondays). It is accompanied by two further exhibits: The Joy of Spring, featuring works from the Shirley Sherwood Collection and Flowering Bulbs and Tubers by the Dutch Society of Botanical Artists.